Rodrigo Moreno swapped Valencia for Leeds United in 2020 and finished his debut season in the Premier League with seven goals and two assists.

This campaign, the forward has managed only two goals from 14 league matches. After being sidelined for over a month due to injury, he returned to action in his side’s 3-2 win over West Ham United on January 16th.

Mundo Deportivo on Thursday explain the 30-year-old is ‘does not go through the best moment’ at Elland Road and has emerged as a transfer target for Barcelona in the winter market.

The La Liga side are keen to sign Álvaro Morata, who is currently on loan at Juventus from Atlético Madrid. Despite the difficulties to take the former Chelsea man, the newspaper states the Catalan club’s priority is to sign a striker and another attacking player.

It’s claimed ‘there are several names that are being offered’ to Xavi Hernández’s side and among them are Rodrigo and Valencia’s Maximiliano Gómez. 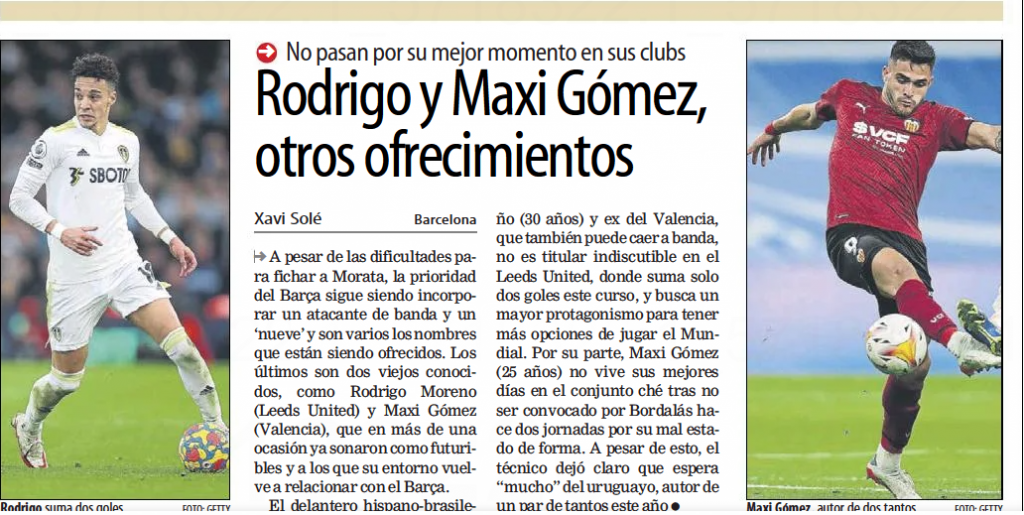 The Spain international can either play up front or on the wings. The 30-year-old is not an ‘undisputed starter at Leeds United’, under the orders of Marcelo Bielsa.

Mundo, therefore, state Rodrigo is ‘looking for a greater role’, likely in the second half of the season, so that it improves his chances of going to the Qatar World Cup with La Roja.

Given Barcelona’s scattergun transfer approach of recent years, it’s no surprise if agents are trying their luck.