After struggling for more than a month, Arsenal bounced back in the last two weeks as they won their last four matches, conceding only one goal in the process.

Recent results have also seen a reduction in reports around Mikel Arteta’s future at the Emirates.

Today’s Mundo Deportivo has a report on the Gunners manager with a title ‘Arteta has been left alone’.

The newspaper talks about the sports structure put in place at the north London club after Arsène Wenger stepped down in 2018. The plan was proposed by their then CEO Ivan Gazidis and he brought Raül Sanllehí to the club.

Sanllehí’s idea was the team should be supported by ‘four legs; the coach, the director of academy, sporting director and the operations director’. This was in place when Unai Emery was appointed in the summer of 2018.

Emery was sacked in November 2019 and a month later, Arteta was appointed as his successor. By then Edu Gaspar had returned to Arsenal as their technical director.

“Mikel was perfectly suited to have all that structure around him, with Edu as sports manager, to focus exclusively on his work,” a source told Mundo

Just months after Arteta’s appointment, the pandemic impacted football, both on and off the pitch, and ‘unleashed an unprecedented crisis’. Arsenal had to make staff redundant and players had to take a pay cut.

A source said: “The Kroenke family panicked. They have five franchises in different sports: in the NFL, the NBA, the NHL, the MLS and the Premier League.”

Stan Kroenke sent Tim Lewis, his trusted lawyer, to London to oversee the impact of Covid-19 at Arsenal. At that time, as per the report, it wasn’t expected the club’s sporting structure would be dismantled.

“Returning to the old model did not have to do with an economic issue but rather with an ego issue,” Mundo cited.

Sanllehí was shown the exit door and Arteta was ‘left helpless’ by the decision. The manager started to absorb more power than he would have liked.

“He is one more victim,” an unnamed source said about the former Manchester City assistant manager.

Mundo also pinpoints the hierarchy has been reversed. Earlier, Arteta used to report to Edu, but now it’s the other way around.

He is in charge of contacting the owners to discuss renewals and signings. Until last summer, Sanllehí and Edu were in charge of it, and now Arteta is given the task. This distracts the coach, who has to ‘dedicate himself to other matters beyond training’.

Arsenal began to believe in the future after winning the FA Cup and Community Shield, but Mundo state the reality is they are still far from being one of the best clubs in Europe. 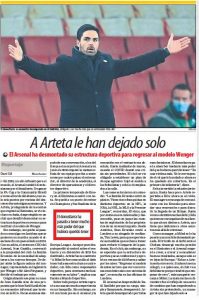 As a manager, ‘Mikel has been wearing a too heavy backpack’. Those close to Arteta have warned Arsenal not to sack Arteta and also present their arguments.

‘Kicking Arteta would be another mistake. If now they bring Allegri, or whoever it is, the club is going to weaken because it will have to start from scratch,’ emphasised those close to Arteta.

The Spaniard has been given more power than he would have liked to have and the recent developments at Arsenal have made Arteta feel like he’s been left alone, report Mundo Deportivo.