FC Porto’s failure to qualify for the Champions League’s knock-out stage should have big impact in the club’s financial situation, according to today’s report from Record.

The newspaper explains that with the money the club will not receive, they should now look for other ways of income, and the fastest solution for that is to sell some of their stars.

It turns out that could be good news for Newcastle United, who for a few months have been linked to Porto star Luis Diaz and should now have a better chance of signing him.

Record claims that the Dragons will at least need to listen to offers for their big stars, including Diaz and Otávio, even though they don’t want him gone in the January window.

The newspaper points out a ‘dream scenario’ for Porto, which is to repeat what they did with Eder Militão.

The defender was sold to Real Madrid in January 2019, but only completed the move in the summer, and that’s the most ‘feasible’ possibility they have now. 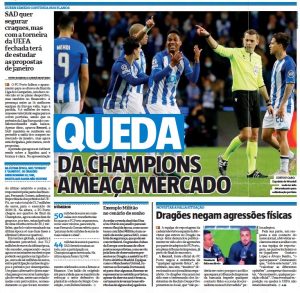 Newcastle have been linked to Diaz a few times in recent months, and one of the stories had already claimed that the best option for the Dragons would be to find an agreement now and keep him until the end of the season.

So if the Magpies are really watching the situation, this is undoubtedly a good time for an approach, giving them the ability to secure a potential future St James’ Park star early on amid interest from bigger clubs.