Borussia Dortmund’s Jadon Sancho was Manchester United’s main transfer target in the summer, but the Red Devils failed to sign the winger.

The saga about United’s interest in the 20-year-old dragged through the last transfer window as the Old Trafford club reportedly refused to meet the fee demanded by the Bundesliga side.

Sancho finished the last campaign with 20 goals and 20 assists in all competitions.

The England international has struggled to replicate the same form this term as the attacker scored his first league goal of this campaign against VfL Wolfsburg on Sunday.

Borussia Dortmund CEO Hans-Joachim Watzke has now admitted the attacker was mentally prepared to leave the Bundesliga side in 2020.

“Jadon might have been subconsciously prepared for a change. I think he had at least thought so much about it that he lost his ease, but I have found him trying very hard for weeks,” Watzke told Kicker.

“The magic, as Edin Terzic put it, is not back yet, but he has not forgotten anything.”

“The biggest difference is: he used to not think about his next ball action. Now he thinks about it. And the tenth of a second he misses is often exactly the one in which the opponent is already standing on his feet. The more you try as a creative person, the more difficult it often becomes.

“I think he needs two or three successes in a row, then things will quickly improve again. He is still one of the greatest talents there is.”

Although Kicker or Watzke doesn’t specifically mention Manchester United, the Premier League side were the only club to have shown firm interest in signing Sancho in the summer.

There were repeat claims Borussia Dortmund were demanding €120m to let Sancho leave, but Watzke has now dismissed this. The German club’s chief made these comments when asked if it was a ‘mistake’ to retain the wideman.

“The alleged transfer fee often mentioned in the media never existed in reality. And if you 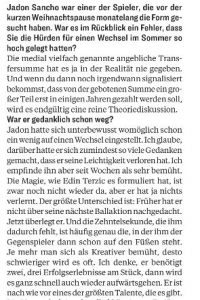 get a signal at some point that a large part of the amount offered will only be paid in a few years, it will finally be a pure theoretical discussion,” he explained.

Ole Gunnar Solskjaer wanted his employer to strengthen the right side of the attack, and United did it by signing Facundo Pellistri and Amad Diallo on deadline day.

Pellistri hasn’t featured for United’s first team, while Diallo is expected to arrive in Manchester today, months after agreeing a deal with Atalanta for his transfer.

For those who still hold out hope on Jadon Sancho moving to Manchester United… the Watzke comments could suggest that Dortmund are willing to sell for less than €120m.