Home Europe “It brings us back to Tottenham” – Club chief speaks about transfer...
SHARE

On New Year’s Day, Marca reported that Tottenham Hotspur are ready to ‘get rid’ of Fernando Llorente.

It was also claimed the 33-year-old was close to returning to Athletic Club Bilbao in the ongoing transfer window.

Mauricio Pochettino has the Spaniard and Harry Kane as the two recognised strikers in the squad and with the latter’s form, it is difficult for the Argentine coach to rest Kane for the former Swansea City man.

Limited playing time at north London club saw him express his desire to rejoin the La Liga outfit in the winter market.

Aitor Elizegi was elected as the La Liga outfit’s new president, while the club’s former defender, Rafael Alkorta was appointed as the new director of sports.

Bilbao’s newly elected chief sat down for an interview with Spanish newspaper AS where he was asked about the possibility of signing Llorente from Spurs in January.

“[Re Llorente] But, it also brings us back to Tottenham,” he explained. 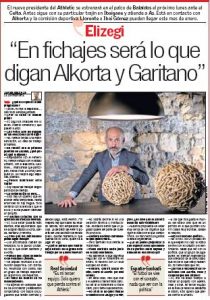 “We don’t know what it means to negotiate with Tottenham in January or to do so with any European club in January.”

The interviewer then compares Llorente’s case to Ibai Gomez’s, who is also available to talk to clubs in January.

“In this case, I think it’s clearer with Ibai [Gomez] and Alaves. I do not know if it is at Tottenham, but they have their rights.”

If the two clubs can agree a deal, then Llorente can get his wish of returning to his former club.