Burnley took Wout Weghorst from VfL Wolfsburg in the January transfer window in order to improve their chances of staying in the Premier League.

The striker managed two goals and three assists from 20 league matches for the Clarets, and was unable to help Burnley avoid relegation from the top flight last season.

He is unlikely to stay at Turf Moor and play in the Championship next campaign. Beşiktaş are interested in taking the 29-year-old and the deal is expected to be sealed in the coming days. This has been confirmed by their president, Ahmet Nur Çebi.

“It will not take too long. It will be over in two to three days. We’re dealing with the club right now. Muleka is also one of the targets, but Weghorst is ahead,” Çebi was quoted as saying by today’s edition of Sabah. 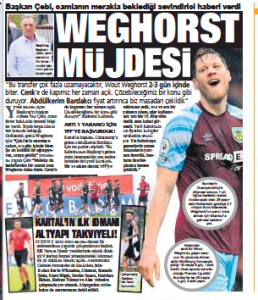 long loan deal. As part of the deal, Beşiktaş will not pay any loan fee to Vincent Kompany’s side.

However, the Black Eagles will pay the Netherlands international a salary of €2.7m per year during his temporary stay at Beşiktaş next season.

Sabah claim Weghorst is ‘expected to come’ to Istanbul to sign his contract tomorrow.