Gonçalo Guedes has long been on Wolverhampton Wanderers’ radar and as we enter the last week of the transfer window, the Premier League side haven’t taken the necessary steps to sign the Valencia player so far.

Last week, AS reported Wolves will make an approach for the 24-year-old if Tottenham Hotspur can give Adama Traoré to Nuno Espírito Santo.

The Portugal international was one of the topics discussed, and Valencia continue to insist he won’t be sold for less than €30m. If there’s no offer to match their valuation, the former Benfica man will continue at the Mestalla. 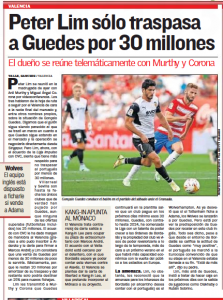 José Bordalás wants to retain the player and Lim ‘acknowledged’ that Wolves pose a ‘threat’ in the Valencia manager’s desire to keep Guedes at the club.

There’s a belief Bruno Lage’s side will go after him if they sell Traoré to Spurs.

With Wolves willing to sign the attacker if Traoré leaves, AS warn that what remains to be seen is the ‘predisposition of Guedes’ to move to Molineux.