Barcelona haven’t done so badly in recent weeks when it comes to actual football. There’s been further crisis off the pitch, and a new president was finally elected at the weekend, so the drama feels like it’s never-ending.

Ilaix Moriba can ignore all of that. The 18-year-old midfielder is enjoying something of a breakthrough season for Barcelona.

He scored against Osasuna in La Liga at the weekend, and is the subject of much praise from the Catalan media. Things could have been very different, with a transfer attempt from Chelsea reported in Monday’s edition of Sport.

It’s stated one of Joan Laporta’s first tasks as president will be to sort out a renewal for the youngster, given his current contract expires in June 2022. As it stands, Moriba wants to renew, however, things could have been different in recent transfer windows. 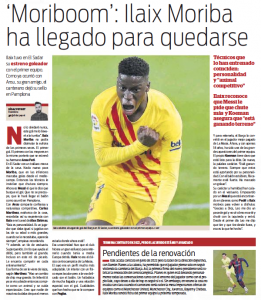 The player had an ‘important offer’ from Chelsea, as well as approaches from other clubs. The Blues signing effort is therefore presented as serious, but if there’s no big disagreements in renewal talks it looks like their chance has gone.