Barcelona need sales this summer and there’s not an awful happening in terms of clubs coming forward with big offers for their players.

That’s seen the Catalan media start to grasp at straws and one of them has the name of Chelsea on it.

Saturday’s edition of Mundo Deportivo reports Barcelona suspect they will find buyers in the Premier League this summer, allowing them to bring some much needed cash in. The club ‘need sales’ and it’s claimed several English clubs have asked about potential purchases.

When it comes to the Champions League winners, the newspaper states ‘Chelsea would be willing to bid’ for Miralem Pjanic. 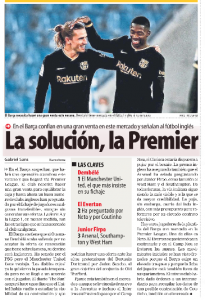 That is literally all they have to say on the matter, and it sounds very optimistic from a Barca perspective… overly optimistic. Pjanic is 31-years-of-age and last season he didn’t exactly shower himself in glory at the Camp Nou.

He made 30 appearances in the last campaign, and only played a full match a handful of times. Quite why Chelsea would want to send Barcelona a big chunk of money for Pjanic is unclear, and this feels more like hope than expectation from Mundo Deportivo.