Chelsea and Paris Saint-Germain are keen on signing Achraf Hakimi and Inter Milan are demanding around €70-75m for the right-back.

The Blues tried to lower the fee by offering Emerson Palmieri and Andreas Christensen to the Serie A side.

The Nerazzurri have rejected this option and according to Calciomercato, Chelsea’s ‘new counterpart’ to take the fullback will be Marcos Alonso. Simone Inzaghi’s side would welcome the possibility of taking the Spaniard.

Corriere dello Sport explain the Morocco international is likely to leave the San Siro, and Inter’s priority is to strengthen their fullback positions. For the left side of the back four, Alonso is the main target for the Italian champions.

Inter chiefs Giuseppe Marotta and Piero Ausilio have informed Thomas Tuchel’s side that as a ‘counterpart’ for the Hakimi operation, they prefer to take the former Fiorentina man over Emerson, Davide Zappacosta, Tammy Abraham or Mateo Kovačić.

Contacts between the two clubs are ‘frequent’ and [former Chelsea manager] Antonio Conte’s farewell from the Milan club ‘increases the chance of an agreement’, most likely for a deal involving Alonso plus money for Hakimi. 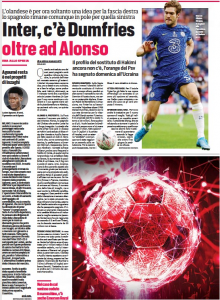 Corriere, however, warn Chelsea that PSG have not ‘left the scene’ and their sporting director, Leonardo, is ‘waiting for the right moment’ to return with a ‘cash-only’ proposal to sign the right-back.

If Hakimi ends up in Paris, Inter will still try to get Alonso, but the ‘difficulties’ to carry out that operation will be ‘greater’ for Inzaghi’s side.

‘The air is changing’ – Belief club will sell Chelsea target if he wants transfer, ‘ball officially passed to player’

Player’s entourage have let club know ‘of a preference’ for Tottenham...

‘The air is changing’ – Belief club will sell Chelsea target...

“Sold to Everton” – Pundit says midfielder is heading to Goodison...