Frank Lampard’s decision to drop Kepa Arrizabalaga for over a month in 2020 gave rise to a number of reports suggesting Chelsea will bring in a new goalkeeper this summer.

The Blues turned their attention towards Barcelona star Marc-André ter Stegen, according to Sport.

It’s claimed Barca were aware of the ‘great interest’ from the west London club, along with Manchester City and Juventus, in the German.

Chelsea ‘wanted’ the player, who has a contract at Camp Nou until 2022. Unfortunately for the Stamford Bridge side, the 28-year-old never opened the door for a transfer.

The newspaper states the custodian is of the belief a move to Chelsea would not help him fulfil his desire of winning important trophies.

Pep Guardiola’s side, on the other hand, tried to sign Ter Stegen two years ago as City’s coaches love his ‘dominance with the ball at his feet’.

However, the English champions knew the player’s intention was to continue with the Catalan club.

Even though there’s been interest from elsewhere, Sport adds there’s belief at Barca the stopper will renew his contract at the club. 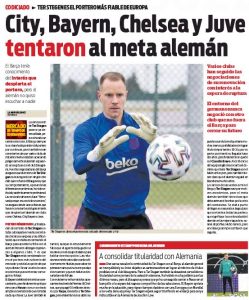 After weeks of doubts, there has been progress in the renewal talks.

Quique Setién’s side want to finalise the extension before La Liga resumes and everything indicates Ter Stegen’s new deal can be agreed in June.