Having come up through the ranks of Barcelona’s youth system, Gavi made his first team debut in August. Since then, he has been featuring regularly for the La Liga side, making 14 appearances in all competitions this season.

The 17-year-old’s emergence at the Camp Nou has caught the attention of Chelsea, so much so that, the Blues are ‘very keen’ on securing his services.

That’s according Sport on Friday, who add the Champions League winners ‘could make a move soon’ for the midfielder.

Gavi has a €50m clause in his contract and Chelsea owner Roman Abramovich is ‘willing to pay the release clause’. This would allow the west London club to incorporate ‘one of the most promising’ youngsters, who has the potential to be a huge future star. 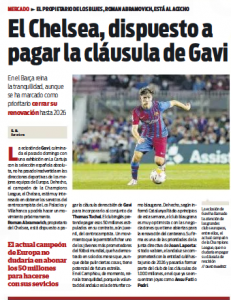 Even though Thomas Tuchel’s side ‘intend to pay’ the fee, the La Liga side, at the moment, are calm because of the player’s desire to succeed at the club.

Barca, as per Catalunya Ràdio, have held talks with Gavi’s camp over a renewal and are ‘very optimistic’ of securing the teenager’s long-term future.

If all goes well, Gavi will sign a new five-year deal that will include a release clause of €1bn.

These Chelsea claims, which are floating around several Catalan sources with varying degrees of reliability, appear like an effort to hype Gavi and encourage talk of a new contract.