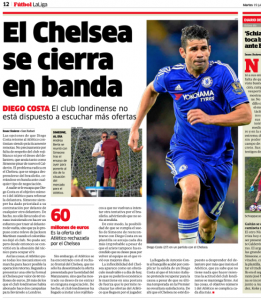 Atletico Madrid are very clear on their desire to purchase Diego Costa from Chelsea this summer. The club’s president has made no secret of the plan, but of course it’s very much down to Chelsea whether things happen or not.

According to Spanish newspaper Marca, things seem to have taken a dramatic turn. Rather than Atletico trying to get Costa back for less than Chelsea paid, on the basis of the player pushing for a return, Marca say the Spanish club have offered €60m.

That represents a hefty profit for Chelsea, but the Premier League club have still turned it down. Not only that, Chelsea have refused to enter into further negotiations with Atletico, and told them not to bother returning with another offer for the player.

Marca now say it’s increasingly unlikely Atletico will get their way, and things are over, but the Spanish media have stated that before… and then changed their mind the following week.