The Chelsea player’s latest stunt, spreading images of himself looking tired and emotional in an Atletico Madrid shirt, falls into the latter category.

Everyone knows Diego Costa wants to return to Atletico Madrid and that the club want to sign him, the striker wasn’t exactly revealing any deep held secrets.

Despite that, he’s a Chelsea player, being paid by the club, and even if he has no respect for Antonio Conte, he could at least pretend to have respect for the fans, who in the past have backed the striker to the point of defending the indefensible. 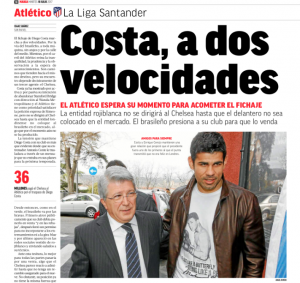 Marca report on Tuesday that Costa’s return to Atletico is going at two speeds. The player himself is going ‘full speed… down the middle of the road’, whilst Atletico are more patient.

Atletico believe they can sit back and be patient, as Costa becomes a bigger headache for Chelsea. The Spanish club are also waiting for Chelsea to sign Costa’s replacement, knowing it will then be easier to do a deal.