Earlier on Thursday, we covered the latest on Matthijs De Ligt and Chelsea’s desire to sign the Dutch defender from Juventus.

The claims came from Calciomercato and La Repubblica, with the idea that the player could be sacrificed next summer as he’s one of the more valuable players they have on the transfer market, and the Blues had already started an ‘offensive’ to sign him.

Furthermore, the latter explained that a fee of at least €80m would be needed, which we know Chelsea can spend on a player if they want, having shown as much in the past.

Now, Corriere Torino bring their own information to the table, who back much of this up, pointing out the Stamford Bridge side are ‘taking concrete steps to build their future defence around’ De Ligt. 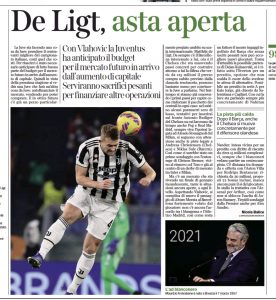 While there’s the €125m release clause in the summer, ‘less may be enough to convince Juventus to talk about it’, which Calciomercato had also mentioned.

As for who could replace the Dutchman, Antonio Rüdiger and Andreas Christensen are named, since they’re both expected to leave on a free from Chelsea at the end of the season unless they agree to a renewal.

It’s becoming clear that Thomas Tuchel has firmly set his sights on the former Ajax star to replace likely departing centre-backs, but a very high fee will be needed to achieve that goal.