Monday morning saw claims that Liverpool were on the verge of signing Ibrahima Konate from RB Leipzig. The claims, which originally came from The Athletic after multiple reports of interest in Germany earlier this year, were backed up to a certain extent by L’Equipe.

Later in the day, Bild reported that Leipzig sources knew nothing of the potential move. They hadn’t been contacted by Liverpool and they hadn’t had any transfer indication from the player’s representatives.

The Reds wouldn’t have to go into tough talks with Leipzig if they’re prepared to pay Konate’s release clause, which is just over €40m, in one go.

L’Equipe have a more in-depth look today and they insist there’s no finalised deal, with the possibility that Chelsea could move into the picture and snatch the signing.

Chelsea were one of the clubs linked repeatedly by the German media earlier this year, but it would be a surprise if Thomas Tuchel’s side snatch the player from Liverpool’s clutches now. 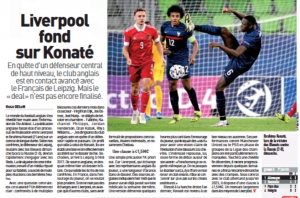 French sources close to the player have wanted to be ‘more careful’ when speaking about a possible move to Anfield. Whilst they’ve not denied contacts with Jurgen Klopp’s side, it’s been made clear other clubs, with Chelsea the only one named, are also in the picture.

Liverpool are thought to be ‘ahead of the game’, although claims of a medical have been denied by the player’s entourage.