Seeing Sergio Ramos arrive at the club, Presnel Kimpembe might have had a few reasons to be worried about his future.

A regular for France at the Euros, the 25-year-old has also been an ever-present figure at Paris Saint-Germain over the years, but things could change in the near future with the Spaniard’s presence.

That’s where Chelsea come in, according to L’Equipe, who have a look at what the future might hold for Kimpembe going forward.

The French newspaper make it clear that, as things stand, the centre-back isn’t overly worried about his status at the Ligue 1 side, nor is he thinking about leaving.

Firstly, he’s ‘very attached to his childhood club’, but also because he’s worked hard to earn his reputation, winning over Mauricio Pochettino in the process.

That being said, Kimpembe is ‘waiting to see how his status with evolve in the next few weeks’ and whether he gets ‘signals of confidence from the club to value what he sees as an evolution of his status over the past two years’, being vice-captain and all.

If that isn’t the case, the player ‘knows he has a certain following’ in the market for left-footed centre-backs, and it’s from London that a ‘concrete interest’ has been shown. 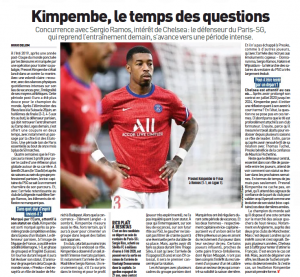 It’s stated that ‘Chelsea have been lying in wait to sign the Frenchman for many years’, and that’s ‘still the case this summer’.

However, if they are to get their man, Thomas Tuchel’s club ‘will have to sell’, and if they do ‘the Kimpembe saga could take shape’.

That’s certainly something to look out for, especially if Chelsea aren’t able to convince Sevilla to sell Jules Koundé at a reasonable price.

Perhaps the Blues would have more luck in getting Kimpembe?