Chelsea are ‘serious’ about a move for Monaco midfielder Aurélien Tchouameni, who is set to trigger an auction between the biggest clubs in Europe.

That’s according to Tuttosport, who say the Blues are ready to battle Liverpool, Real Madrid and Juventus for the Frenchman’s signature.

They explain that Juventus are determined to add reinforcement to their midfield as early as the January transfer window, and Tchouameni is at the top of their list.

He’s been linked with the Italian giants for months and was ‘sounded out’ in the summer, but his increasingly impressive performances for Monaco mean he has started to ‘trigger a European auction’ for his signature.

The ‘richest clubs’ in Europe are all keen on his signature, including Chelsea, who are ‘serious’ about the highly-rated youngster. 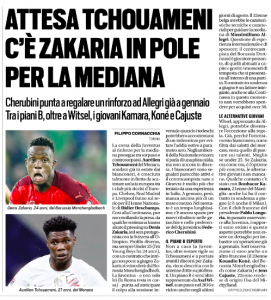 The Blues interest is something that Juventus are aware of, so much so that they have started to turn their attention to alternative targets such as Denis Zakaria and Axel Witsel.

They are ‘not giving up’ on Tchouameni at this moment in time but the competition is gearing up to make their move and Juve need to plan in case they can’t win that auction.

Chelsea are seemingly set to be a part of the bidding, which is apparently set to get going soon as Tchouameni continues to impress for club and country.