Chelsea are expected to make a bid for the AC Milan goalkeeper Pepe Reina on Thursday, according to reports from the Italian press.

Tuttosport claims that Chelsea officials will be in Milan tomorrow to present a €6m offer for the former Liverpool player.

Reina would be a special request from Maurizio Sarri, who has previously worked with the player at Napoli.

The 35-year-old arrived at Milan this summer on a free transfer. That’s one of the reasons the Rossoneri could accept Chelsea’s offer, as they would make a pretty decent profit with a player who cost them nothing. 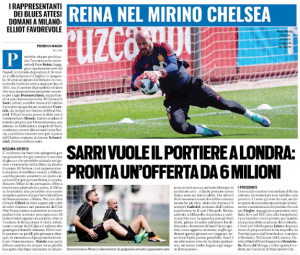 The Italian side would also be encouraged to let Reina leave because they didn’t get any offer for Gianluigi Donnarumma so far. That means the Spaniard, who’s a second option, can simply be replaced by a club youngster.

With Rob Green being brought in to Chelsea already, Reina would obviously be more senior.