There are many things that can make a story unbelievable.

A lot of the time it’s the source, but sometimes it’s just the timing that makes you think “that just doesn’t sound right”.

This is what happened on Thursday when we opened Il Messaggero and saw a story about Chelsea being ‘ready to make an offer’ for Ciro Immobile.

Immediately, the Italian newspaper made it clear buying the striker would be extremely difficult, especially midway through the season, and €100m or so (an ‘indecent offer’) would be needed to make Claudio Lotito even think about it.

It seems a lot, and that’s the point since it’s a tactic that’s worked over the summer with Sergej Milinkovic-Savic, who remains a Lazio player for the time being. 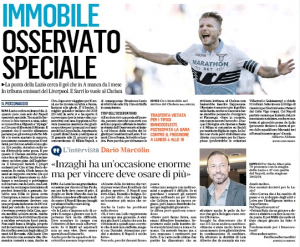 Chelsea have an advantage over other clubs (Liverpool are said to be interested, but that’s come from England) in that they can offer Davide Zappacosta (whom the Serie A club really want) to lower the asking price, but even that won’t be enough.

Why? Well, firstly, the Blues have just agreed terms with Juventus for the loan of Gonzalo Higuain, expected to take Alvaro Morata’s spot at Stamford Bridge.

Secondly, even with Davide Zappacosta as a discount voucher, a deal would cost around €80m, which is an amount of money Marina Granovskaia won’t pay for a 28-year-old who has no Premier League experience and whose resale value will start dropping as soon as the deal is done.

Thirdly and finally, if she’s unwilling to put €50m on the table for Nicolo Barella, a 20-year-old midfielder most agree could become a world beater, we can’t see her agreeing to this.

We might be very wrong, but if this happened, it’s fair to say it would come as a massive shock.