It’s really hard to keep up with what’s going on over at Chelsea regarding Antonio Conte’s successor, with contradicting stories and daily updates that change extremely quickly.

On Monday, we covered Il Mattino’s latest report, which claimed Maurizio Sarri’s chances of staying at Napoli were ‘very few’, and Chelsea were touted as a potential landing spot.

Of course, the Blues aren’t the only ones in the mix, although they are the biggest club on the list of suitors, which, you would think, makes them the favourites were they to come forward.

However, the very same newspaper on Tuesday explain Chelsea don’t have Sarri top of their list, since that man is Carlo Ancelotti, who recently declined to take over as Italy’s next manager. 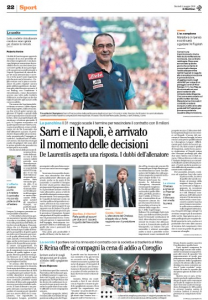 Il Mattino state that Roman Abramovich’s club are ‘ready to dash’ towards their former manager, which basically means they will throw themselves at him.

The experience Ancelotti would bring is rare on the current market, especially when taking into account he’s already been successful in England.

This is just one of many claims that are likely to come between now and the end of the season, adding itself to the long list already available around our website as we continue to try and make sense of what’s going on out there.