Ivan Perisic’s contract with Inter Milan expires at the end of June, so there’s inevitably doubts around his future.

Over the past week there’s been links with multiple Premier League clubs, and it’s thought the player is waiting to see if an English club seriously approaches him.

Monday’s edition of Corriere dello Sport explains the Croatian ‘hopes’ to receive a ‘concrete offer’ from a club in England, with Chelsea pushed forward as a possibility.

No other clubs from the Premier League are named.

Inter Milan want to keep Perisic and are offering a one year contract with the option for a further year. The salary would be €4.5m per season, a figure which will be after tax.

Given he’s 33-years-of-age, signing the player would be a gamble for Chelsea or anyone else. That said, he’s always kept himself in peak physical condition, and has played 48 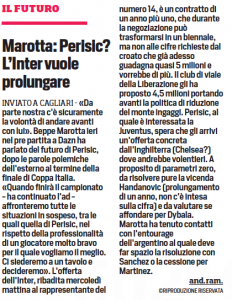 matches for his club this season.

Over those games he’s contributed nine goals and nine assists, so is clearly still able to have an impact.

Corriere dello Sport make it clear that should Chelsea, or another big English club, come forward then Perisic will be interested.