Over the past few weeks, it’s all been about Olivier Giroud and Fikayo Tomori when it comes to Chelsea players potentially heading to Milan.

Tuesday, however, offers us a new name, and no, it’s not Emerson Palmieri.

It’s Hakim Ziyech, who has endured a difficult first season at Stamford Bridge under both Frank Lampard and Thomas Tuchel.

Arriving from Ajax in a widely approved €40m transfer, the Morocco international was meant to be the revolution down Chelsea’s right hand side, but he has been anything but.

The 28-year-old has scored just six goals and assisted a measly four in 39 appearances in all competitions, and while some of those came in important games against Manchester City, few will argue that Ziyech’s first campaign in blue has been a success. 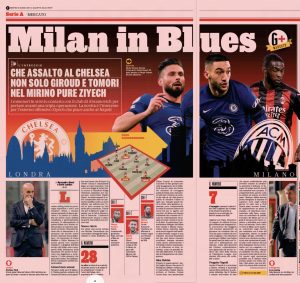 Furthermore, it appears he is out of Tuchel’s long-term plans, which opens the door for an exit as early as this summer.

This is what Gazzetta dello Sport think, reporting that Ziyech’s relationship with his German manager is ‘broken’ and the player is ‘officially on the transfer list’.

Napoli are also on the case, and a lot of work is needed to try and get anything off the ground regarding a transfer, or even a loan.

Either way, it’s stated Stefano Pioli ‘likes’ Ziyech, as he could ‘represent a boost of energy’ down the wings, and the Chelsea man could represent an ‘excellent solution’ for Milan.

First, however, it seems there is a need to sort out the Olivier Giroud and Fikayo Tomori transfers.