Monday’s edition of Sport has what is presented as the latest on César Azpilicueta’s future at Chelsea.

For months, the Catalan media have been reporting the Spaniard wants to leave Chelsea this summer and move to Barcelona. There had been hope he’d simply be able to exit Stamford Bridge on a free transfer, but with the Blues having an option to extend, and using that, it makes the situation more difficult.

Azpilicueta will this week speak with those in charge at the Premier League club, and request that he be allowed to move to Barcelona. The Blaugrana have already agreed a deal with the player, which would see him sign for two seasons plus the option of a third. 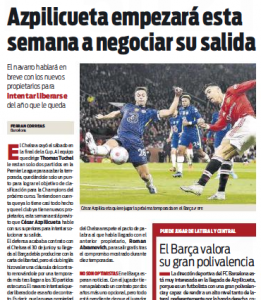 Should Chelsea refuse to allow a free transfer, then there’s a suggestion from Sport that a player, presumably on the fringes at Barcelona, could be used in the deal.

That could also drag Marcos Alonso into the picture, with the possibility of multiple exchanges between the two clubs.