On Tuesday, we covered an article from the Italian media looking at the situation involving Kepa Arrizabalaga and a potential move to Lazio.

The Spaniard is currently struggling for game time at Chelsea, and there was a belief that Maurizio Sarri, in search of a new goalkeeper, could ask his superiors to try for his former pupil.

Area Napoli, however, made it clear that, as things stood, that was difficult to pull off in January, with the gap between demands and what Lazio could afford being too big midway through the season.

There was some hope that a deal could be pulled off once the campaign came to a close, and that’s echoed in Corriere dello Sport on Wednesday.

The Italian newspaper add their two cents to the rumours, explaining Kepa ‘is the dream’ for June, and the ‘next few months’ will give us an idea of whether the loan can be done or not. 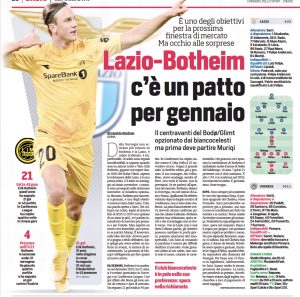 While the Spain international is expected to get some game time in Édouard Mendy’s absence during the Africa Cup of Nations, that won’t be enough to earn him his starting spot back, and it’s becoming increasingly clear that ‘there is no future in England’ for him.

Regarding any move, it’s obvious that Chelsea would have to help out with the wages, which are a ‘pharaonic’ €5m/year, and around half of that would need to be covered by the Stamford Bridge side.

It seems, at least, that Kepa will remain in London for the time being, but next summer could be a whole different matter altogether.