Home Premier League Chelsea Chelsea player in ‘request to Tuchel’ not to play against Everton –...
SHARE

On Friday, Chelsea announced they have completed the signing of Marc Cucurella from Brighton & Hove Albion.

It was also stated the 31-year-old has said goodbye to his Chelsea teammates as he wants to complete a move to Barcelona this weekend.

Sport on Saturday also explain the Spain international will be a new Barca player. They state the operation is ‘very advanced’, but his signing could be made official after the new La Liga season starts on August 13th.

The Blaugrana’s priority is to register the players they have already signed and get rid of those who are not included in Xavi Hernández’s plans. Although the Chelsea fullback will be a Barca player this summer, he will have to ‘have a little more patience’. 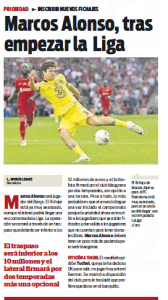 Chelsea travel to Goodison Park to face Everton in the first tie of the season today. The ex-Fiorentina man made a ‘request to [Thomas] Tuchel’ not to play him against the Toffees. Alonso is available for selection, but doesn’t want to represent the Blues.

Sport state Alonso’s signing will cost Barcelona less than €10m. He will sign a two-year deal with an option to extend it by a further year.