Home Premier League Chelsea Chelsea player ‘should leave this window’ – Club will ‘probably be in...
SHARE

For a first official game in charge, a 3-0 win over Sampdoria was just about perfect for Andrea Pirlo and his new look Juventus.

However, there is one area which, due to an injury to Alex Sandro, could do with a little bit more depth going into the rest of the campaign, and that’s left-back.

That’s why, despite all the positives in the Italian press on Monday, Gazzetta dello Sport feel that Emerson Palmieri, currently at Chelsea, remains a target for those in charge in Turin.

The Italy international has yet to feature under Frank Lampard this season, which has led to a lot of speculation surrounding his future at Stamford Bridge.

It’s explained Emerson ‘should leave Chelsea and is of interest to many Italian teams, with Inter at the front’. 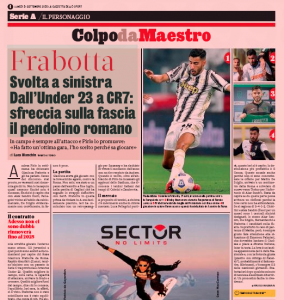 Juventus are then described as an ‘ancient fan’ of the player, and with the ‘right formula’ (a loan with a mandatory purchase clause is suggested by the newspaper), the Serie A champions would ‘probably be in touch’.

With just a few weeks left in the transfer window, we’ll have to see what comes of this, but considering Frank Lampard’s lack of trust in the player and Chelsea’s apparent desire to get some funds back in following a free spending window, Palmieri could be one of the easy sacrifices at Stamford Bridge.