One of the big questions marks in Milan at the moment other than will Zlatan Ibrahimović stay is the future of Gianluigi Donnarumma.

The goalkeeper has been a staple at the Serie A club from a very young age, but with that came big wages demands, pushed by Mino Raiola, and there’s now doubt as to whether or not the Italians can afford to keep him.

This has led to rumours sending him abroad, like to Chelsea, and they’ve refused to go away.

The Stamford Bridge side haven’t quite managed to fix the post Thibaut Courtois era, since Kepa Arrizabalaga hasn’t met the expectations that came with his €70m transfer from Athletic Bilbao, and Willy Caballero, while a good backup, isn’t the answer either.

We’ve seen many names said to be on Frank Lampard’s list, ranging from believable ones like Mike Maignan to the more ludicrous ends of the scale, such as Manuel Neuer.

Donnarumma probably falls somewhere in the middle, as he would command a hefty transfer fee (around €50m), which is what Corriere dello Sport explain on Monday. 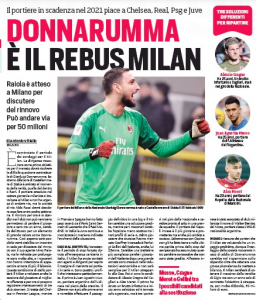 The ideal scenario would be for the 21-year-old to renew and stay, but Milan know how expensive that would be, and they ‘don’t have any intention of weighing down the budget even more’.

This means the club are ‘valuing a sale of the player to the highest bidder, and there could be three foreign clubs interested’.

The first mentioned are Chelsea, while the other two are Paris Saint-Germain (who will need a long-term solution to Keylor Navas) and Real Madrid.

As for Italy, Juventus keep monitoring the situation, but they seem content with Wojciech Szczęsny for the time being, recently extending the former Arsenal man’s contract.

We all know Chelsea will fork out the money if they desperately want a player, but their biggest concern in all this will be somehow trying to recoup some of their money for Kepa.