Home Premier League Chelsea Chelsea may have to wait on €70m transfer, but clause would ensure...
SHARE

The Italian press aren’t letting Kalidou Koulibaly to Chelsea go just yet, even though all the signs currently point towards the Senegalese defender staying at Napoli for at least an extra year.

The original claims of this came from Il Mattino, a Naples based newspaper, who reported the club were trying to persuade K2 to remain for the coming season with a promise he would allowed to leave next summer.

Since then, a few others have picked up on this, and Gazzetta dello Sport seem to think Antonio Conte’s attention has turned to Torino’s Nikola Maksimovic. 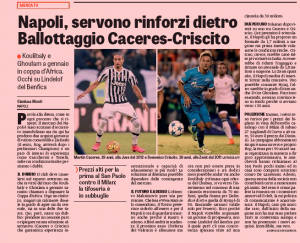 This has been covered widely already, by ourselves and others, and it’s the Koulibaly update that we want to focus on as the Italian newspaper report negotiations between club and player are moving towards a €70m release clause being added in his contract for the next summer transfer window.

Of course, this is a lot of money, but Aurelio De Laurentiis has made it very clear he isn’t willing to sell.

At least, it’ll provide a figure for clubs to aim for if they really want the 25-year-old rather than not knowing how much Napoli really want for their star.

If Napoli are capable of holding out and selling Gonzalo Higuain to Juventus for €90m, €70m for their best defender seems like something that could happen next summer, especially if the player repeats some of his performances from last season.