Sunday’s edition of Sport has an article on Tottenham Hotspur moving into the picture for Philippe Coutinho.

They take many of their claims about Spurs from the English media, but make sure to then say that it’s Chelsea which is looking the likelier destination at this moment in time.

As far as the Catalan newspaper has it, Chelsea are the ‘main candidate’ to sign the Brazilian, regardless of the claims made about Jose Mourinho’s side.

That’s because the Blues are already in negotiations for a deal, and those talks are ‘well underway’.

It’s thought Chelsea would be likelier to agree to a compulsory purchase than Tottenham, however, there’s a chance that neither club will need to. Barcelona are so keen to get a deal done for Coutinho that they know they’ll have to compromise on something along the way. 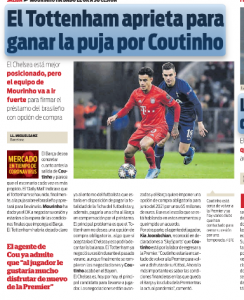 Barca are hoping for a mandatory buying clause of €65m in any loan, and it’s quite possible that figure will have to drop, or the mandatory part will need to change to optional.