Nuno Mendes is the subject of a growing Portuguese transfer saga.

The Sporting player has been linked with both Manchester United and Manchester City recently, with both clubs thought to have spoken to his agent over a possible move.

Miguel Pinho represents the 18-year-old left back, and he’s also Bruno Fernandes’ agent. Last week, Pinho watched his client play at Old Trafford, and there were claims the trip was also used to discuss Nuno Mendes.

Then came reported talks with Manchester City, and now it’s Chelsea’s turn to be dragged in.

Wednesday’s edition of Record reports the youngster was in a meeting with Pinho at a Lisbon restaurant on Monday evening, and they have picture evidence. At that chat he was informed of the situation regarding a potential transfer.

After the agent’s trip to England, Manchester City are thought to be leading the signing race, ahead of their neighbours United. Chelsea ‘join the fight’ and have contacted Pinho to try and learn the conditions of a deal. 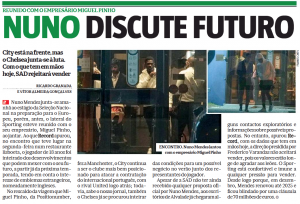 Sporting haven’t received any official offers, however, they have been softly proposed amounts before an actual bid. These have been quickly dismissed because the figures aren’t near the amount Frederico Varandas, the club’s president, wants.

This one looks set to run, perhaps beyond the end of the current window.