Alex Telles’ dream of moving to the Premier League is highlighted by Portuguese newspaper A Bola today, as they analyse the future of the Porto left-back.

The outlet first claims the 27-year-old is at the peak of his career, having his best season ever, and making a move ‘inevitable’ in the next summer window.

And following his desire to play in English football, there’s a specific club who’ve been interested in his signing, which is Chelsea.

It’s claimed that the Blues are the ones who’ve made the initial contacts for the transfer, and could be bringing him to Stamford Bridge at the end of the season (whenever that is). 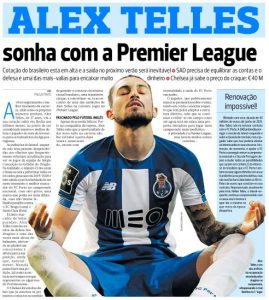 Alex Telles’ contract with Porto expires in 2021, and although the Dragons would like to extend the deal, A Bola says it’s ‘impossible’, since he thinks that would harm his chances of leaving the club.

That’s why Porto need to make money with the sale next summer.

Telles is protected by a release clause of €40m, and despite his great form, A Bola reckons it would be hard to find a club who would spend that amount on him.