Chelsea spent in excess of €100m when signing Romelu Lukaku from Inter Milan to bolster their strike force this season.

The Belgian has four goals to his name in 10 matches in all competitions, and hasn’t found the back of the net since September 14th.

Former Italy striker Antonio Cassano has suggested Lukaku’s struggles are down to Thomas Tuchel’s system, and the player not fitting into it.

Despite investing big on the ex-Everton man, the west London club reportedly continue to look for a new striker.

This week’s edition of SportBild explains the Champions League winners are in the poker for Borussia Dortmund star Erling Haaland. 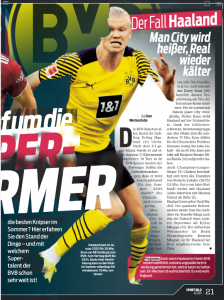 Manchester City remain the ‘hottest’ to sign the Norway international, but Chelsea must not be ignored.

The latest edition of the magazine has also published an interview with Thomas Tuchel and the coach admitted Haaland was discussed internally at Stamford Bridge.

“We talked about Erling Haaland a couple of times, including during the transfer window. But then it seemed absolutely unrealistic and not at all feasible,” Tuchel told SportBild.

“We talk about him regularly, of course, because he’s a fantastic player and clearly the defining figure at Dortmund, who is a big rival for us in the Champions League.”

He was then asked whether he can see Haaland joining Chelsea next summer or if the position is already secured with Lukaku’s arrival in the summer.

Responding to that, Tuchel said: “You mean two at the top [with] Lukaku and Haaland? We can talk about it (laughs)!” 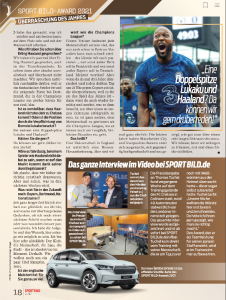 Haaland’s impressive scoring record will see him draw attention from top European clubs, especially due to his €75m release clause, plus bonuses, that will come into effect from next summer.

Tuchel, however, isn’t really focusing on the BVB striker as of now.

“I don’t think we’ve been really serious about it yet, but let’s see what will happen in the next few weeks,” he stressed.