Over the past few weeks, we’ve seen a couple of articles appearing here and there regarding a reported Chelsea interest in Adrien Rabiot.

The Frenchman could be sold this summer if the right offer comes along as his contract in Turin runs out next summer, and considering he arrived on a free, Juventus wouldn’t mind making a healthy profit.

It seems Thomas Tuchel is the one who wants to work with the midfielder, and there was even a chance for Chelsea to sign him in the last transfer window.

That’s according to Corriere dello Sport, who explain the German manager ‘already wanted him in January’, but ‘Saul’s failure to leave early blocked the Blues’ attempt’. 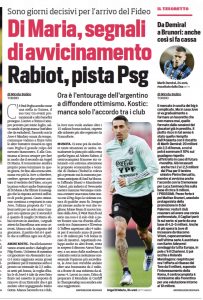 The Spaniard had arrived at Stamford Bridge from Atlético Madrid on a season-long loan, but he never managed to convince Tuchel and earn himself a starting spot in the first-team.

This meant talk of an early exit was rife in January, but this wasn’t something the player nor Diego Simeone were interested in.

Thus, Rabiot, who would have come in to replace him, had to stay at Juventus.

However, with Saul now heading back to Spain and the Frenchman wanting a potential way out, this could be the time to make it happen.