Even though Chelsea full-back Davide Zappacosta got linked to several Italian clubs over the past few months, it seems the latest side to join the race for his signing could now win the competition.

As reported by Gazzetta Dello Sport today, Atalanta feel the need of having a back-up option for Hans Hateboer at the start of the season, and have already started working on a transfer.

It’s said the club have been in ‘very concrete discussions’ with Chelsea for Zappacosta, whose exit from the Stamford Bridge is ‘very well underway’ after not being included in the squad for the European Supercup.

The Blues initially demand between €4m and €5m for the move, but seem fragile with his contract expiring next year. That’s why Atalanta push for a loan deal.

Gazzetta Dello Sport points out that Zappacosta had been linked to the likes of Inter Milan, Napoli, Fiorentina and Genoa this summer. 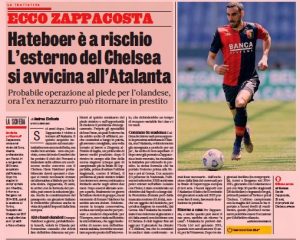 Atalanta had thought of his name a few months ago, and despite having decided to move only now, they may actually achieve his signing.

Zappacosta had already belonged to the club between 2011 and 2015, so the move is seen as an unexpected comeback.