Home Premier League Chelsea Belief player ‘could have a place’ at Chelsea as other options prove...
SHARE

Chelsea could become an option for Antoine Griezmann this summer as their pursuit of an elite level striker becomes more difficult.

That’s according to Mundo Deportivo, who believe the Frenchman may become a viable alternative to the likes of Erling Haaland and Robert Lewandowski.

Chelsea are keen to add an elite level striker to their squad this summer and have been heavily linked to the Bundesliga duo for the last few weeks.

Getting either would be a tough affair, though, with neither Borussia Dortmund nor Bayern Munich particularly keen on losing their star men.

The Blues, therefore, may be forced to look elsewhere, and Mundo Deportivo posit that could open the door for Griezmann and give him ‘a place’.

Barcelona are keen to sell the striker this summer as he’s one of their top earners but finding a suitor has proven difficult in the current financial climate.

Few clubs have the money to cover both Griezmann’s transfer fee and wages, but Chelsea would be one of them that could.

They’re ‘looking for a top striker’, but Haaland is ‘very difficult’, and Lewandowksi is ‘not easy’ at this moment in time. 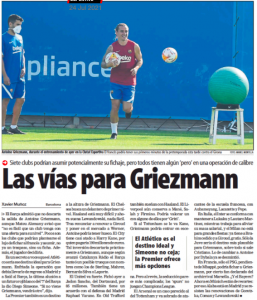 But with Olivier Giroud already sold and Timo Werner ‘on the market’, Griezmann ‘could have a place’ at Stamford Bridge if he wants it.

To be clear, there is no mention of Chelsea being interested at this point; it’s simply MD speculating that they could become interested as they face frustration getting the players they actually want.

If they do turn their attention to Griezmann, they will need to convince him of the move anyway, with Sport reporting that he’s told Barcelona he’s only interested in one club this summer and that’s Atlético Madrid.