Barcelona’s desire to strengthen their attack saw them look at Erling Haaland as their main target. The cost of the deal and competition to sign the Borussia Dortmund star has convinced the La Liga side to look elsewhere.

On Tuesday, AS reported the Catalan club have identified Liverpool star Mohamed as the ‘priority alternative’.

The forward’s contract at the Merseyside club expires in 2023 and uncertainty is growing.

Wednesday’s edition of Mundo Deportivo reports the Catalan club ‘contemplate the option’ to sign the Egypt international, who is now an ‘alternative’ to Haaland. His contract situation at Anfield is mentioned.

It’s claimed the negotiations between the Reds and the ex-Chelsea man’s camp are ‘stuck’, leading to strong speculation of a possible transfer after this season.

Salah remains focused on finishing the campaign on a bright note, but it’s insisted the possibility of a ‘change of scenery is on the table’. In other words, the option to change clubs is real, and the chance is now being taken more seriously. 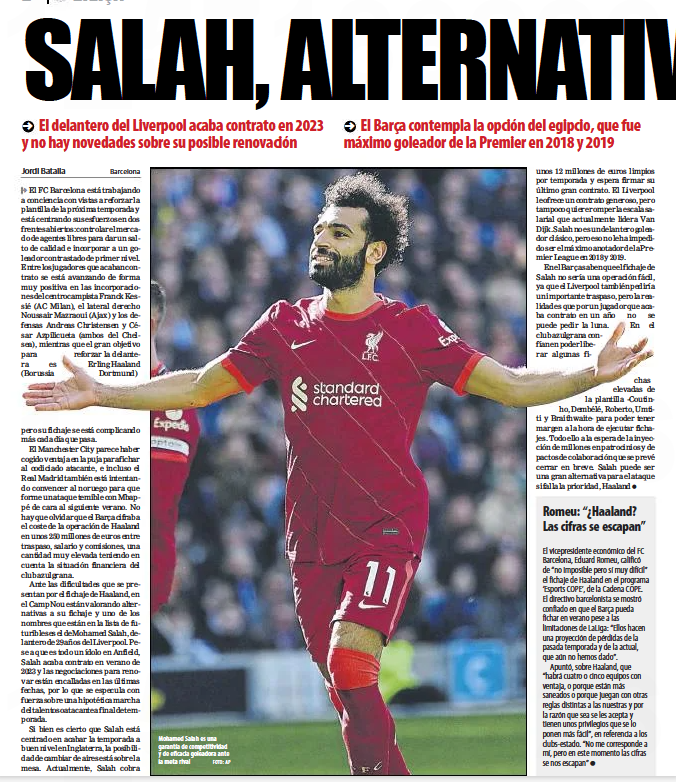 Mundo points out the 29-year-old currently earns €12m net per year and hopes to sign the last big contract of his career.

They state Jürgen Klopp’s side have offered him a generous offer, but don’t want to break the salary structure, ‘currently led by Virgil van Dijk’.

The attacker is an option for Barcelona, who are aware it won’t be easy to take him away from Anfield. Although Liverpool will ask for ‘important’ figures, they ‘cannot ask for the moon’ considering he will have a year left on his contract in the summer.

Salah can be a ‘great alternative’ to Haaland for Xavi’s side, if Barcelona fail to sign the Norwegian.