Leeds United’s big Championship crowds are no doubt an inspiration for Marcelo Bielsa’s team and for those of managers before the Argentine.

Despite being away from the big time for so long, Leeds remain a very well supported club, and that shows in the club’s attendances.

So far this season, Elland Road holds the highest average attendance at 32,942, with Aston Villa not too far behind at 31,440.

However, that big crowd also inspires visiting players, as Neal Maupay has made clear. The 22 year old French attacker plays for Brentford, who are currently averaging 10,055, so the chance to perform in front of such a bigger audience was grasped.

Having scored at Elland Road at the weekend, Maupay has spoken to France’s Nice Matin, and told them: “To score at Leeds, in front of more than 30,000 spectators, it’s a really great moment.” 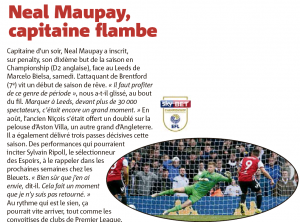 Earlier in the season Maupay scored two away at Aston Villa, which Nice Matin point out is another big English club in the Championship, and chance for the Frenchman to again do his stuff on a bigger stage.

It would appear the young hot shot likes the atmosphere of a big ground.