Chris Smalling is not quite the new emperor of Rome, that titled currently stands with Nicolo Zaniolo, but he’s not far off.

Tuesday’s edition of Corriere dello Sport says the defender has ‘conquered’ everyone since his arrival on loan from Manchester United. Fans and teammates love him and he’s considered the club’s best signing in a while.

Smalling wasn’t convinced of a long stay in Rome when he arrived, according to the Italian newspaper. His idea was rather to relaunch his career and then see where that took him, but since then he’s ‘fallen in love’ with the area and how he’s treated at Roma.

So much so that he’s ‘convinced’ to stay where he is, and the defender’s desire will be ‘fundamental in negotiations’ with Manchester United for a permanent deal.

Living on the outskirts of Rome, Smalling and his family have settled very well, he’s said to be a regular at vegan restaurants in the city and his favourite dish is ‘vegan carbonara’. 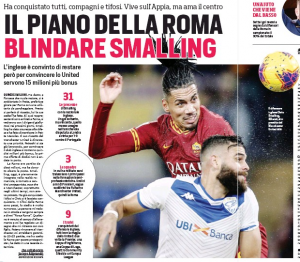 all involved. Corriere dello Sport believe it won’t take long to ‘complete’ matters, and it’ll be done ‘certainly before Christmas’.

Then Chris Smalling and his family can get on with their Italian adventure, one which they clearly seem to be enjoying.