US defender Mark McKenzie is being chased by clubs in Europe ahead of the winter market and the list of sides includes Celtic.

The 21-year-old is currently with Major League Soccer side Philadelphia Union, but his association with them is likely to end soon, if reports are to be believed.

Apart from Neil Lennon’s side, KRC Genk are also credited with an interest in the centre-back. Het Belang van Limburg brings an update on Celtic’s chase to sign the American player.

It’s claimed Celtic were ‘willing to pay a sum between €3m and €4m’ to acquire the player’s services in the next window. However, Celtic have been left behind as the Jupiler Pro League side ‘trumps’ the Scottish Premiership club in signing McKenzie.

According to the newspaper, Genk have the habit of officially confirming the transfer when the ‘agreement is watertight’. Therefore, the patience of their fans is being tested. 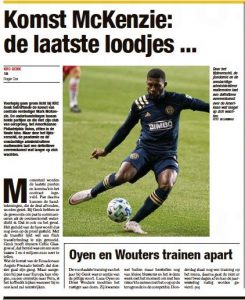 In McKenzie’s case, negotiations between Genk and the player, and the two clubs, are in the ‘final phase’.

The delay is caused due to the time difference between Belgium and the United States, the global health crisis and the ‘cumbersome’ administrative work.

HBVL’s report indicates Genk remain confident of completing the deal for McKenzie, having trumped Celtic in the process.