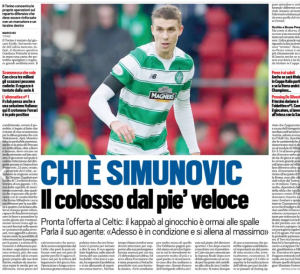 Torino are reportedly interested in Celtic defender Jozo Šimunović, with a Turin newspaper having a huge article on the subject in their Thursday edition.

The Italian side are already in contact with the player’s entourage and are considering making a €3m bid soon, according to Tuttsport.

The only doubt before advancing for a move is about the 22-year-old’s physical condition, since he had a knee injury this year which left him out from February until now.

“Now Jozo is in place, has overcome the problem and is training with no limitations,” his agent Sam Stapleton told Tuttosport.

The representative also made clear that Celtic can make a good price in case they get a share of a future sale: “They’ll sell for much less than what they paid because they’ll make sure that the day when he’s resold for much more, they will get a figure that we’re going to fix now.”

Celtic paid Dinamo Zagreb €7.5m for the player last summer, and are said to not yet be comnvinced on a sale. His agents seems to be wanting a move, but he may still have to do some convincing.