Tuesday’s edition of Il Resto del Carlino, a newspaper local to Bologna, has a look at the club’s transfer negotiations, and Celtic are pulled into the picture.

There’s interest in several players at Bologna, the problem for the Serie A club is that potential buyers aren’t getting close enough to their asking prices.

According to the report, Celtic and Fiorentina ‘are moving’ to sign Aaron Hickey, but Ange Postecoglou’s side value the defender at €4m, whereas Bologna think he’s worth around double.

Fiorentina’s valuation stance isn’t given, and it’s explained Bologna have no intention to sell Hickey this summer. That’s why they’d snub such an offer from Celtic and have put a relatively high value on Hickey despite his low cost to them and his difficult, injury hit, last season. 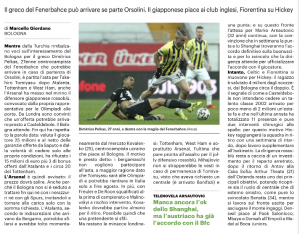 That said, Bologna would surely be tempted with a little more, and it’s down to Celtic to do that tempting. Hickey’s own view on the potential will of course also play a part.