Celtic fans have travelled to Spain for tonight’s clash with Real Betis, despite being banned from the Benito Villamarin.

That’s according to Diario de Sevilla, who say fans were ‘loitering around the stadium’ yesterday ahead of tonight’s game.

Celtic take on Betis in the Europa League this evening, travelling to Seville for the first of their six games in Group G.

The game had initially looked to be taking place in front of a full stadium, but that changed drastically last week when local authorities banned fans from entering the stadium as they looked to respond to the Coronavirus situation in the region.

That ‘did not go down well’ with Celtic fans, who appear to have ignored the rules anyway in an attempt to ‘cheer their team on’. 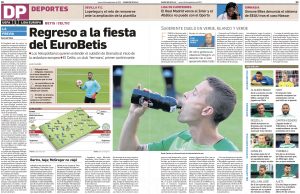 Diario say those who had already paid for their tickets flew to Seville anyway and were seen ‘loitering around the stadium’ yesterday.

The numbers are not huge, though, with it explained that far fewer than the 80,000 who travelled to the region in 2003 for the UEFA Cup final have arrived.

Their behaviour on that date saw them awarded by FIFA, and there’s no indication at this point that the handful who’ve travelled this time around are doing anything but add to that reputation.