If Napoli are to sell Kalidou Koulibaly, they are going to need a replacement, with their number one choice being Lille’s Gabriel Magalhães.

They’ve been after the Brazilian for quite some time, and yet they still haven’t bought him because they are waiting for the Senegalese to leave first.

That being said, they are also aware of the competition for the centre-back, which has led them to ‘take steps to look around’ for alternatives all the way to Celtic’s Christopher Julien.

The Frenchman only arrived at Parkhead last summer, but has already made himself a big part of Neil Lennon’s team, making 46 appearances in all competitions last season.

This is all according to Corriere dello Sport, who explain the player ‘caught the eye’ of Napoli before the season stopped, and ‘led to some thoughts’. 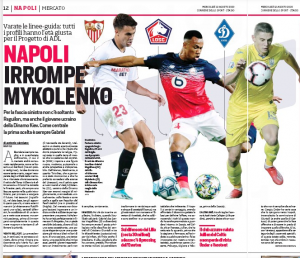 The fact he has an ‘imposing physique’ and ‘scattered experience’ from his time in France, Germany and now Scotland makes him an interesting target for a club who would be losing an experienced man mountain of their own in Koulibaly.

Either way, it’s Gabriel first and Jullien second, so Celtic fans might want to keep an eye on what goes on with the Brazilian.