Celtic were one of the clubs to have showed interest in Barcelona youngster Mika Mármol in the last window.

The 20-year-old came up through the ranks of the Catalan club’s youth system before becoming a regular for Barca B since last season, and attracting Celtic.

He is yet to make an appearance for the La Liga side’s senior team, but his development has clearly not gone unnoticed within the Camp Nou and from other clubs.

That’s according to Mundo Deportivo, who say Xavi Hernández likes Mármol, who is a left sided centre-back. This would improve his chances of making it to the first team since the manager doesn’t favour Clément Lenglet and Samuel Umtiti, and make it harder for Ange Postecoglou to sign him for Celtic.

Mármol has over 18 months left on his contract and continues to attract suitors. The report states Borussia Dortmund and Sevilla have asked about him. 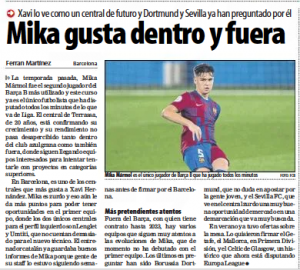 In the summer window, the Barca youngster already had ‘offers on the table’. This is when the Bhoys get a mention. It’s claimed Getafe, Mallorca and Celtic ‘wanted to sign him’.

There isn’t anything to suggest why Celtic’s offer was not accepted and whether the Scottish side still retain an interest in Mármol.