Atletico Madrid are likely to see some of their youth players leave this summer, partly due to the Covid-19 crisis, report Mundo Deportivo on Sunday.

Their B team will play in a restructured league system and there’s the potential for further stoppages over the course of the season. Sponsorship has dropped and rather than being reluctant to see their talents go, Atletico are ready to listen… which could be good news for Celtic.

The Scottish Premiership team ‘have asked’ for Rodrigo Riquelme, and their interest goes back some time. Celtic have been linked repeatedly in recent months, and there’s also been reported interest from Ajax, and clubs in Serie A.

Mundo Deportivo mention Ajax again, and they don’t give any indication which club is currently ahead in the race for Riquelme. 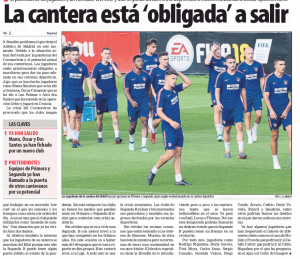 The 20 year old has a contract with Atletico lasting until June 2021, and wouldn’t be a huge investment.

As for whether he’d be keen to join Celtic, Mundo suggest talented youngsters will be ready to listen to offers this summer, knowing they’d have little chance with Diego Simeone’s first team and facing a low level of football with the B side.

“I wanted to leave” – Player explains he pushed for Arsenal...