It’s an open secret that Barcelona want to bring Arthur to the Camp Nou in the summer transfer window.

Earlier in March, the Catalan club had agreed a deal with Gremio to bring the player to the club, either this summer or at the start of the next calendar year.

On Wednesday, we carried a report from Mundo Deportivo, who claimed Barcelona sent Andre Cury to Brazil to negotiate with Gremio, so that they can have Arthur at the club quickly.

Today’s edition of Mundo Deportivo claims Barcelona have already made preparations and the player is now waiting for the Spanish giants to make the payment that will allow him to travel to Barcelona.

The Catalan newspaper seemed excited about the deal and go with a front page saying ‘ARTHUR – YA’.

Ernesto Valverde’s side have already held talks with Gremio to change the terms of the negotiations so they can bring Arthur to the club this summer. Barcelona are now preparing to make the midfielder’s signing official as the player will sign a six year deal. 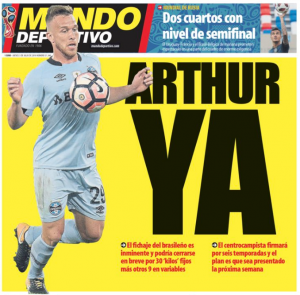 The player and his agent, Jorge Machado are now waiting for a call from Barcelona once the deal is sealed so that they can fly to Europe to complete the transfer. The player’s environment hasn’t ruled out the possibility of the trip happening before the weekend.

Should Arthur travel to Barcelona this week, his presentation will be made early next week so that he can be part of Valverde’s pre-season training from July 11th.