Every time there’s a chance, the Portuguese press gets an interview with Carlos Carvalhal to talk about his current form at Sheffield Wednesday. And it hasn’t been any different in this international break.

The manager has spoken to Record about the start of the season with the Owls, and spoke about the promotion which he will be trying to get for the third season in a row now.

“It is true there are no differences in the numbers of the other two seasons,” Carvalhal told Record. “What has changed here were the expectations, due to the work we have developed here.

“After two years to strengthen the squad a lot, now we did it only surgically, we bet on good and free players. We made a good start, except for two games. We could and deserved to have won all the games we played.” 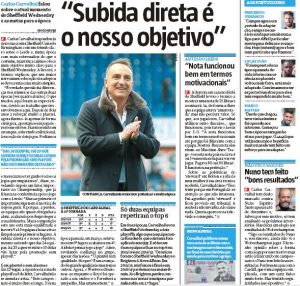 “Scoring first is important but not in the point of view of managing [the result] later. It’s because, when losing, the teams are almost forced to open, eventually not protecting the defensive zone. But the competition this year is more balanced and there will be 9 to 10 teams battling for the top six to the end. The direct promotion is our goal, even knowing that of the 24 teams,  there are 20 wanting to go up and 10 of them will fight for the promotion without playoffs.”

Regarding his rant from last week, when he battered a £20 note in front of journalists, it turned out that his plan worked as Sheffield Wednesday later beat Leeds 3-0.

“The note worked well in motivational terms because it was different with the team. I showed them the note. They laughed. But I told them: ‘I bring you this note because I’d give this note four or five times to watch you play. I’d pay 80 or 100 pounds’. And it worked perfectly.”

And on the players Sheffield Wednesday have to achieve promotion this season, Carvalhal claims they are good enough for it, despite the number of injuries: “The squad has quality. Hooper? He is a great forward but we have others. Now, Westwood was injured while Boyd was operated on one shoulder and Forestieri on one knee. But we’re fine.”

Sheffield Wednesday are currently in 12th place on the table, with four wins, four draws and three losses. The Owls’ next game is on October 14h, when they face Bolton Wanderers.