If there’s one thing the past few days have taught us, it’s that Tottenham’s director of football Fabio Paratici is trying to gift Nuno Espirito Santo a new midfielder before the end of the transfer window.

That doesn’t mean he’ll succeed, but the reported hovering around Weston McKennie and Franck Kessie demonstrate just that, with the latter the harder to get.

Gazzetta dello Sport have an article on the Ivory Coast star’s situation on Thursday, reminding their readers that the player’s contract in Milan expires in 2022, and there have been numerous attempts, all in vain so far, to renew him.

The salary request from George Atangana, Kessie’s agent, is that of €7m/year with bonuses that can take it to €8.5m/year, which he feels would mirror the importance of the player within Stefano Pioli’s squad.

While there is a fear that he could leave on a free, the panic stations haven’t quite appeared, even if there is the feeling that a continued inability to secure a renewal could end up creating a ‘less than serene’ environment. 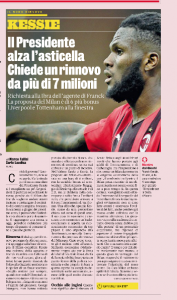 That’s where Tottenham and Liverpool come in, with their ‘interest registered’ behind the scenes, and while they ‘obviously haven’t come forward, every move will be carefully calibrated’.

They know that the closer he gets to the end of his contract, the cheaper he becomes, and there’s also the ‘even more alluring prospect’ of a free transfer if they wait a little longer.

Time is still very much on Milan’s side, since it seems unlikely that either Spurs or Liverpool will make a big move before the end of the transfer window, and if they did, it would probably be rejected.