Lewis Holtby’s contract at Hamburg will expire at the end of this month and the midfielder has already confirmed his decision to leave the second division German side.

“After five intensive years at HSV, the signs are currently saying goodbye. I’m at the age where I am playing my best football and would like to be part of a great project again. We are currently in the active talks with relevant options,” Sport Bild quoted him as saying.

It’s claimed the player’s camp are in negotiations with the Welsh side and four other clubs, but Sport Bild doesn’t provide an update as to where he will play next season.

A move to Cardiff City will see the German play in the second division of English football, and what he thinks about that isn’t covered either. 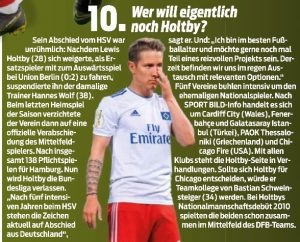 If the Championship club win the battle, they can sign Holtby on a free transfer.